With Nozzle, it’s easy to discover which of your competitors own featured snippets and how many each competitor owns.

Click here to try Nozzle and analyze your industry's featured snippets for free.

Find Out Who Owns Featured Snippets

To view who owns the featured snippets for your keywords, go to the Competitive Share of Voice dashboard and select Domains or Brands in the Rollup dropdown menu. In the Segment dropdown, type in “featured snippet” and you’ll see five options for viewing featured snippets.

For now, select the first one, then sort by Keywords. Filter by keyword group as desired. 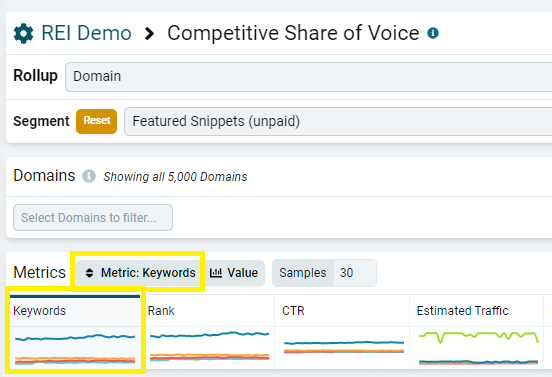 This bird’s eye view of the featured snippet landscape is helpful, but to get even more information about specific domains and their featured snippets, click on one of the domains or brands in the table. I prefer to right click and open it in a new tab in case I need to refer back to this table.

Doing so will take you to a performance overview page for that domain or brand. Make sure your previous segment is applied, then scroll down to the Keywords table at the bottom to see the exact keywords for which this specific competing domain has featured snippets.

I clicked on freshoffthegrid.com. You can see the 62 phrases for which freshoffthegrid.com holds featured snippets, along with their corresponding URLs, and other helpful metrics like Search Volume, Pixels from Top, and Click Through Rate.

Clicking on one of these URLs will open it in a new tab, so you can analyze a competitor’s webpage and strategize accordingly. If you click on one of the keywords, you will be taken to that single keyword’s performance page.

On a keyword’s performance page, scroll down to view the SERP Results displayed in a functional table format. Below that you’ll find the SERP HTML--exactly how the SERPs look in Google. Play around with the Nozzle Vision, SERP history comparison, search, and zoom tools to make the most out of the SERP Results and HTML.

Let’s look at the SERP Results and HTML for the phrase “snow hiking gear” above. 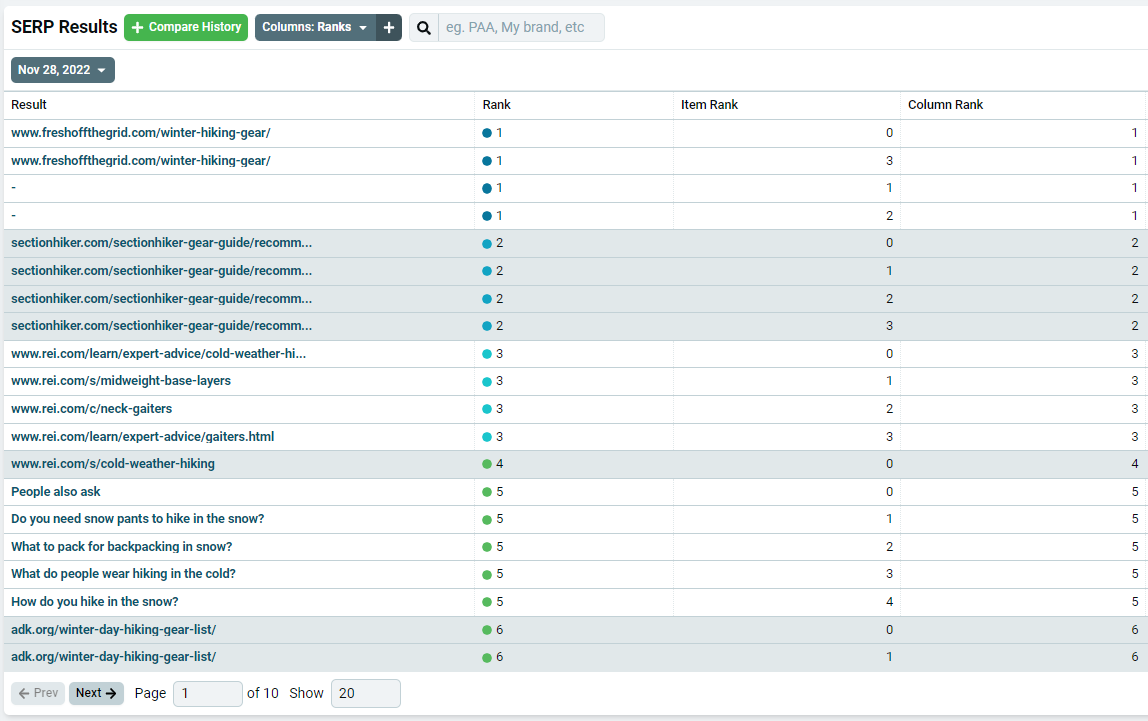 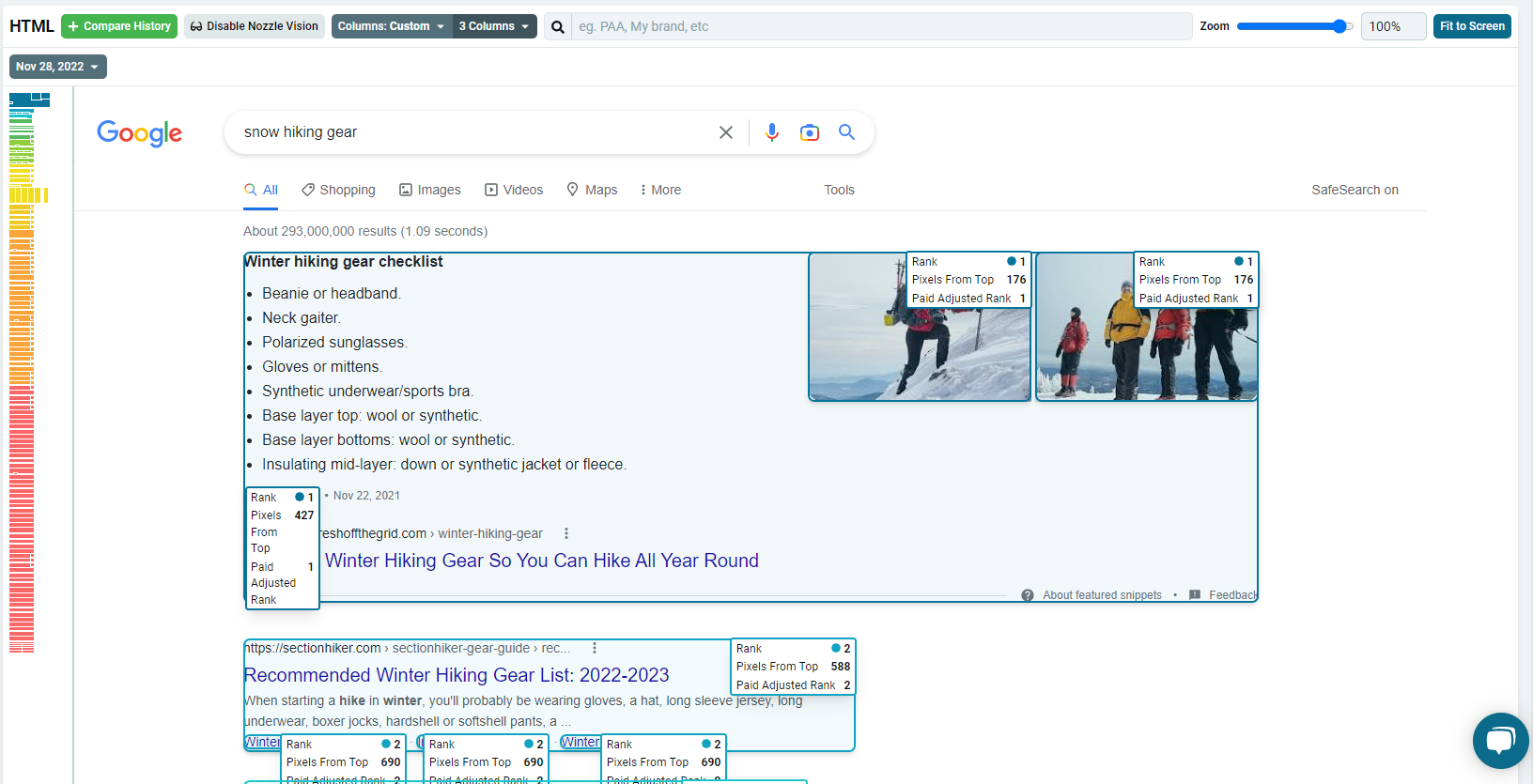 Alternatively, you can directly examine what URLs are ranking as featured snippets by changing from Domain to URL in the dropdown menu. 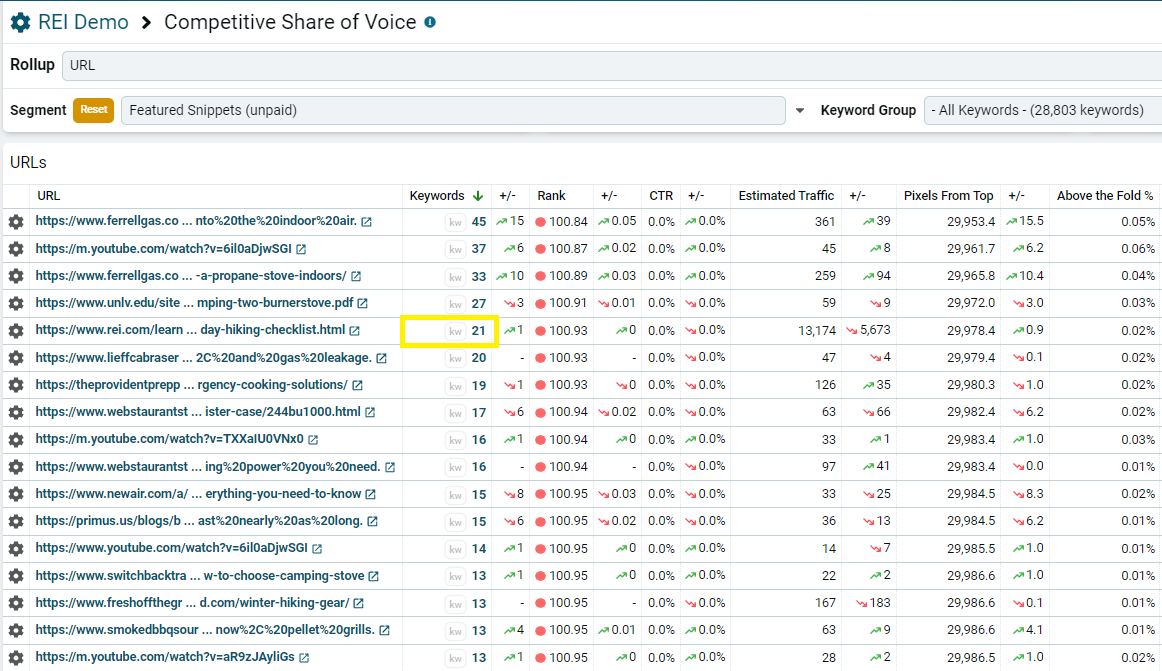 Click on the number in the keywords column to see the keywords for which it has featured snippet status. I clicked on the fifth URL, the one for REI, to see its keywords, which matches the data we saw for it above. 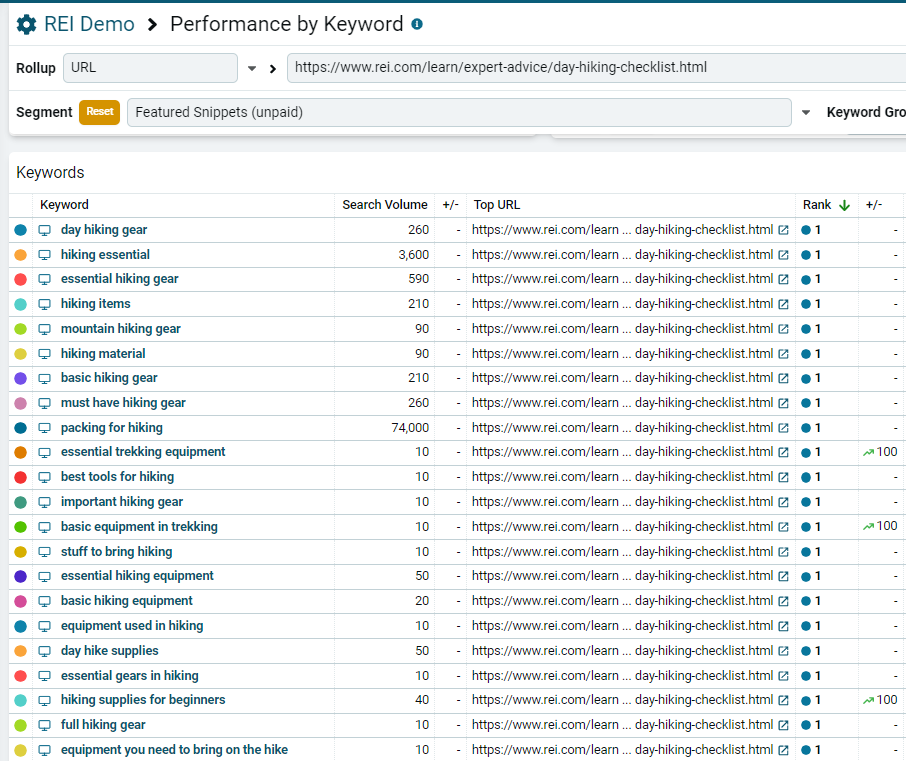 Checking out the URLs directly is an easier way to see if your competitors have one URL that is dominating several featured snippets or if there are multiple. This helps you know real quick which specific URLs you need to analyze and beat out of the featured snippet spot.

To see a featured snippet keyword list, you’ll use the Explore by Keyword dashboard, which will be available in a future update, so stay tuned.

And there you have it! Featured snippet competitor analysis with Nozzle. As you can see, Nozzle is a very useful tool for analyzing featured snippets in terms of your competitors.

New to Nozzle? Try out our tool today!

An avid learner and hiking enthusiast with more than the average appetite for cheesecake, Ian enjoys digital marketing, ancient languages, and 3D design.