The Google SERP today is packed with more features and diversified information than ever before. SEOs have to keep a close eye on evolving SERP features because they affect how we think about and report rankings. They can also take up a lot of space at the top of a results page, pushing traditional blue-link results further down and affecting click-through rates.

How common are SERP features today?

That depends on your search term and the feature.

It's a fun question though, so to try and answer it we pulled together about 1.2 million keywords and looked at the SERPs on both desktop and mobile.

This article looks at the frequency and positioning of 8 SERP features. There are many more features in Google than this, though, so stay tuned for future articles. For now, let's get into some SERP stats! 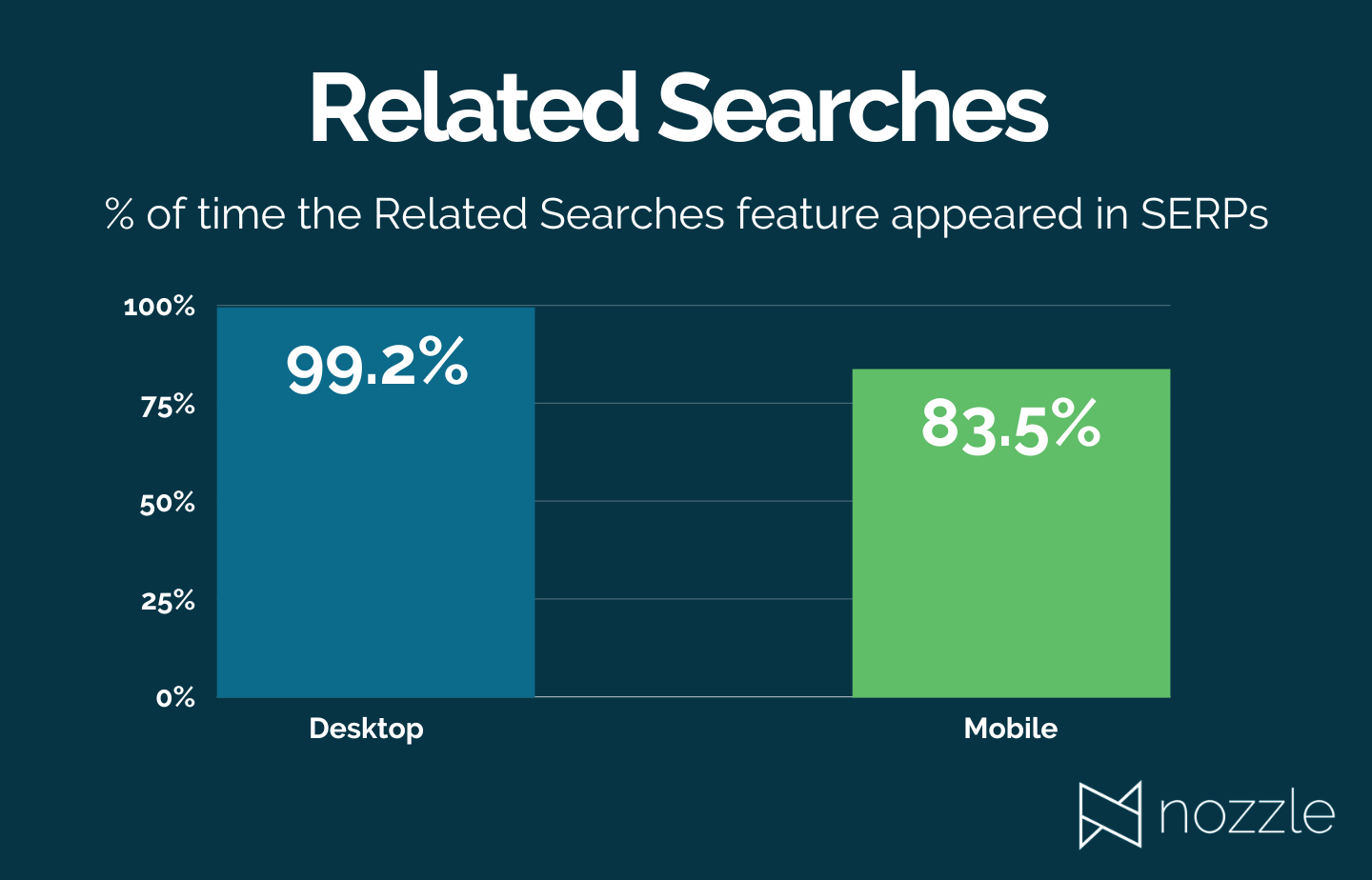 Related Searches is a SERP feature that shows searches that other people have done related to your keywords. Likely not surprising to anybody, the Related Searches feature appeared on 99% of desktop SERPs and 83% of mobile SERPs.

It appeared right where you'd expect it to - below the final search result.

Related Searches can appear as a series of search phrases with magnifying glass icons, expandable phrases with images, or a combination of both (below). 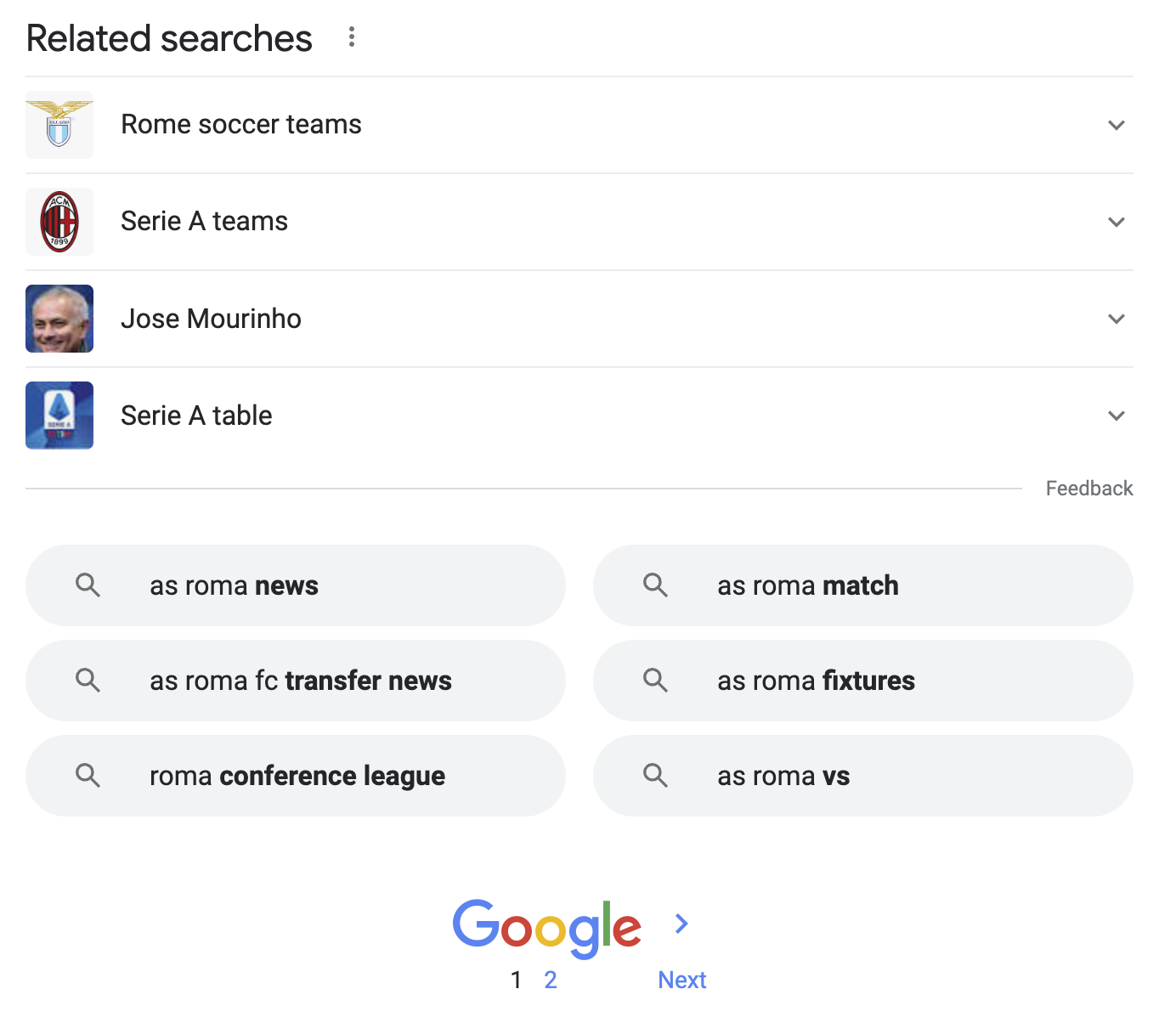 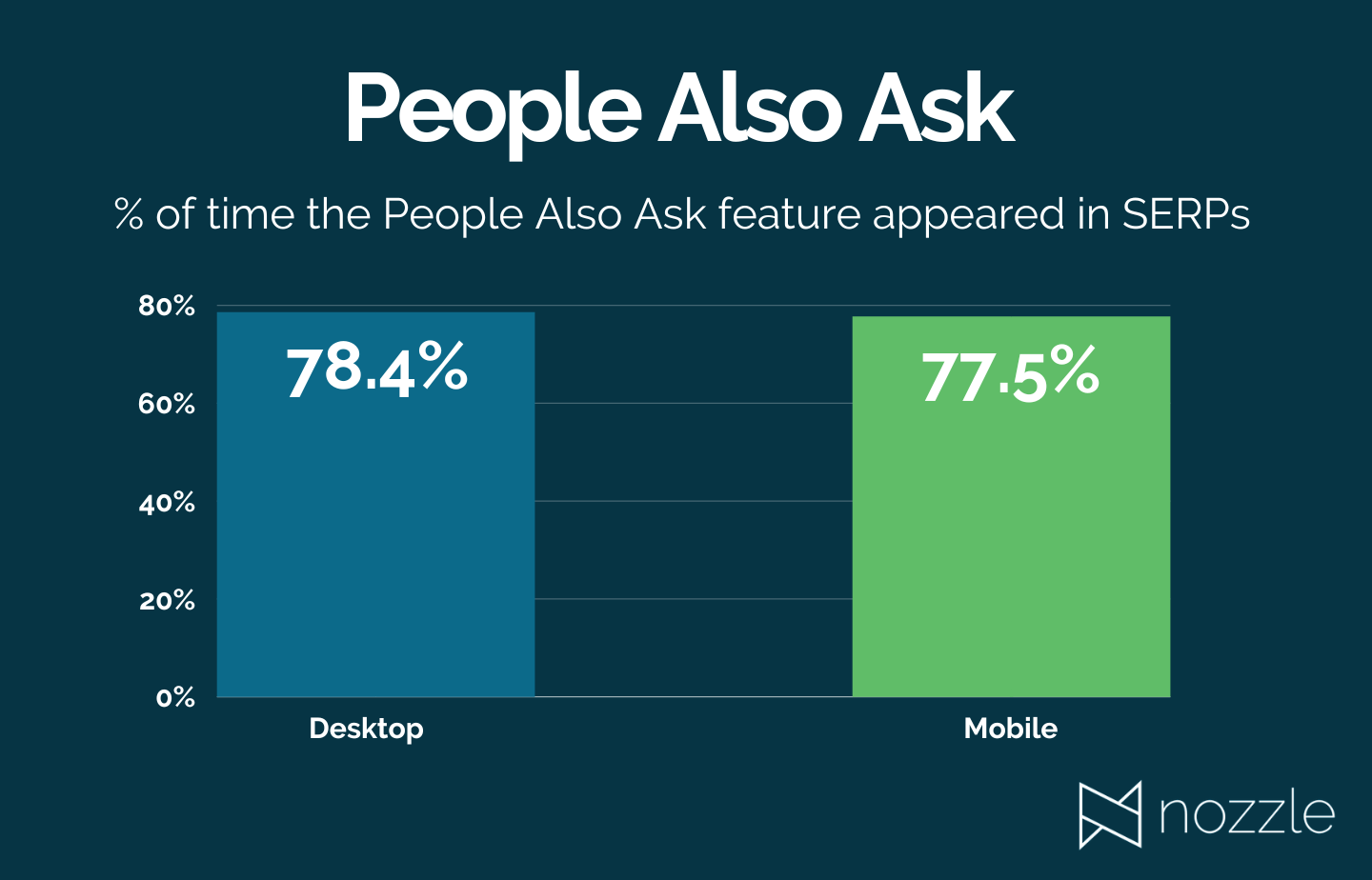 People Also Ask is a SERP feature that shows a box containing two to four questions that people commonly search on Google, related to your search terms.

At 78% on desktop and 77% on mobile, People Also Ask boxes are a popular SERP feature.

How many questions appeared in a PAA box?

We're accustomed to seeing four questions, but did you know that sometimes Google will show two or three questions in a box? We even observed a small number of SERPs where two boxes appeared. One near the top of the SERP and another much further down. 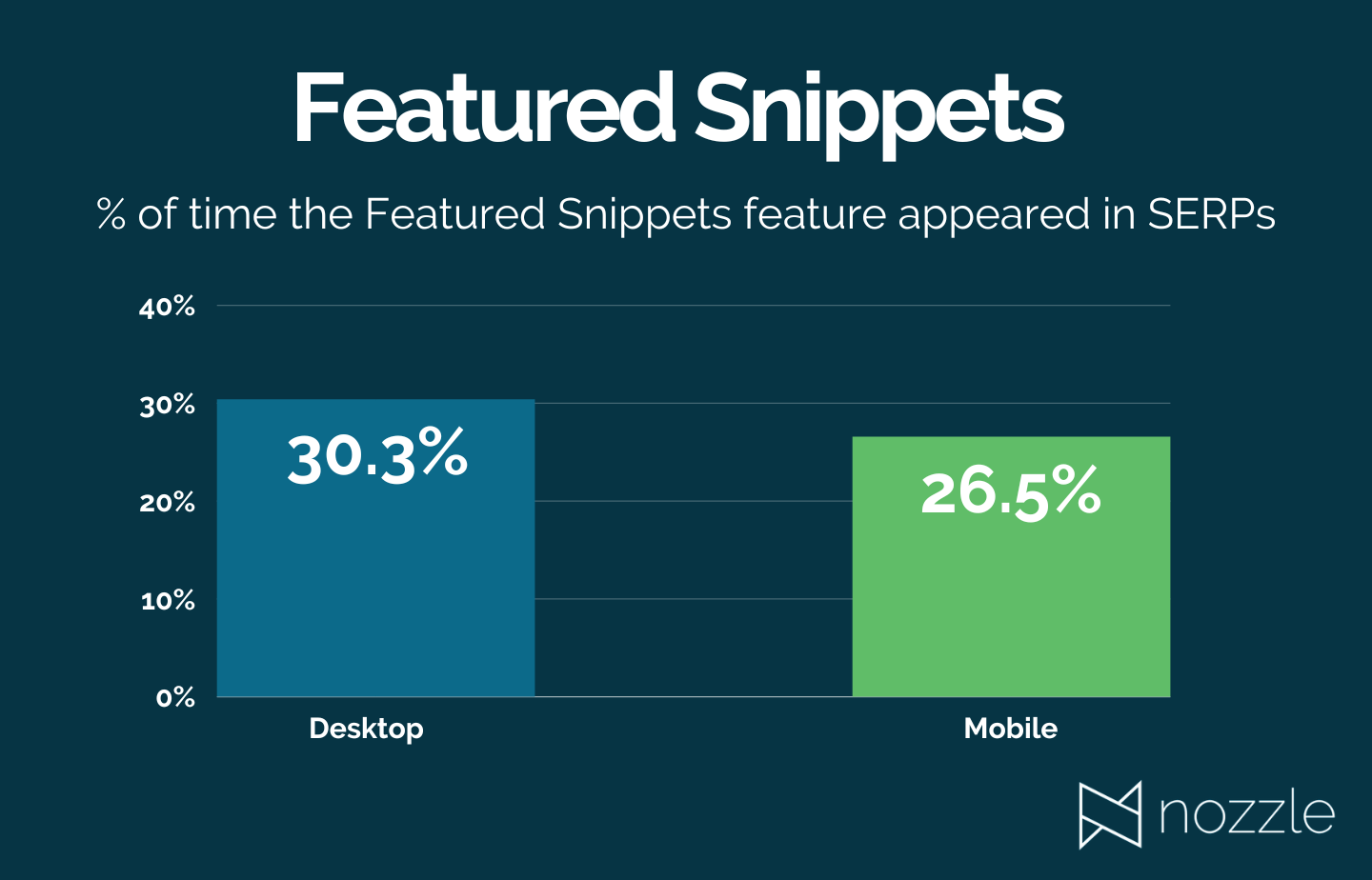 Featured Snippets are another popular SERP feature, though they don't appear as frequently as People Also Ask. It's easy to spot a Featured Snippet by looking for a result that has two links below it: "About featured snippets" and "Feedback".

Google tells us that this SERP feature is a listing where the snippet describing a page comes before a link to a page, not after as with Google's standard format. 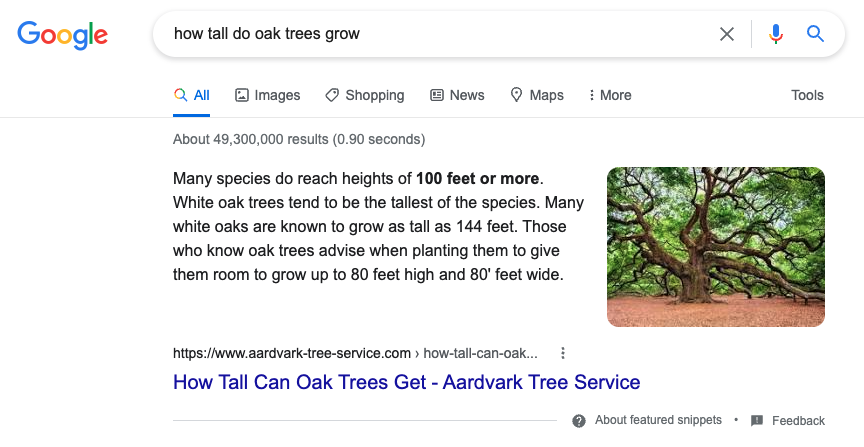 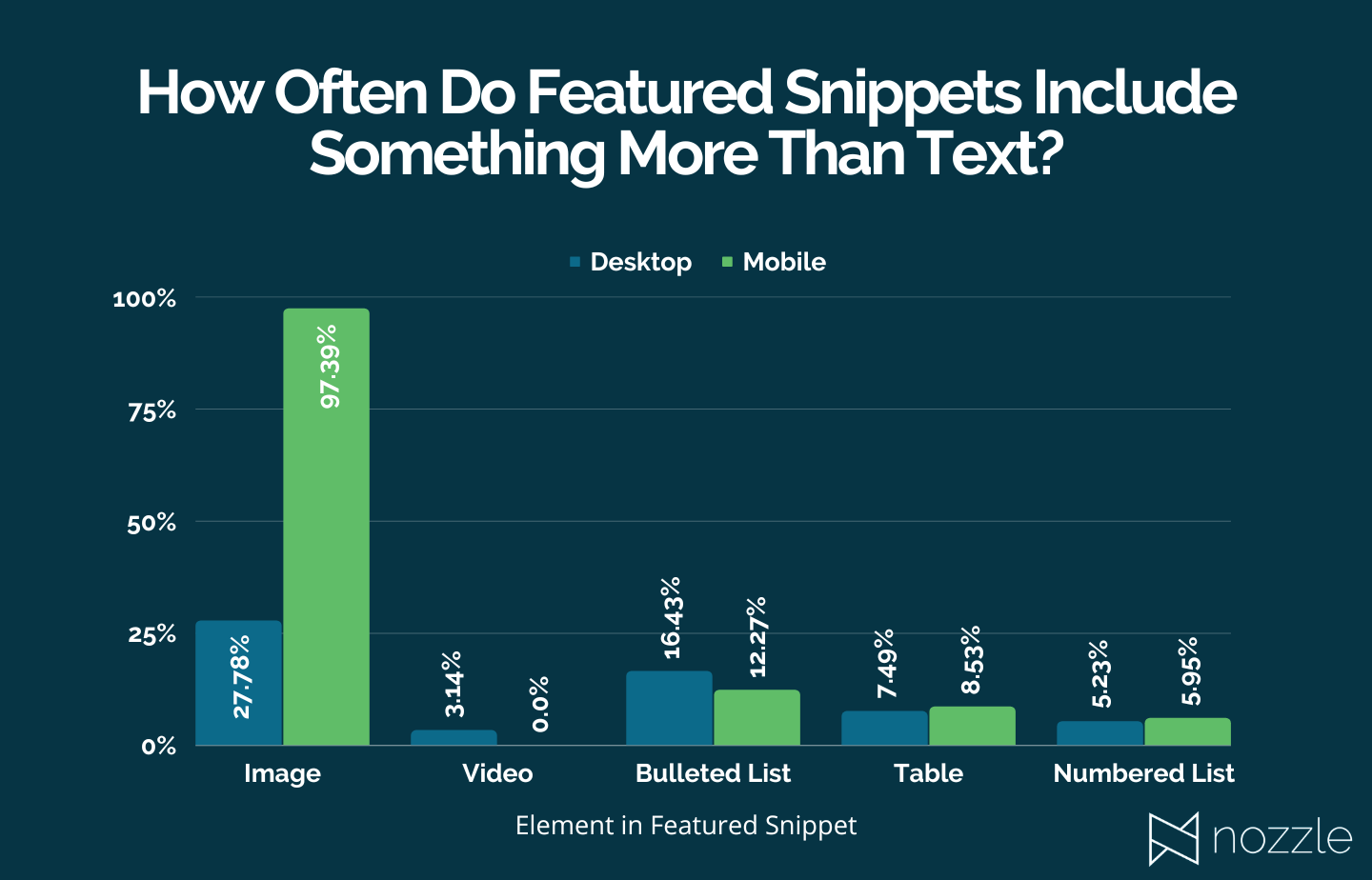 While a paragraph of text alone was most commonly displayed in Featured Snippets, images appeared in nearly all mobile featured snippets (97%), and in about 28% of those on desktop. Bulleted lists were the next most prevalent, followed by tables, numbered lists, and videos. 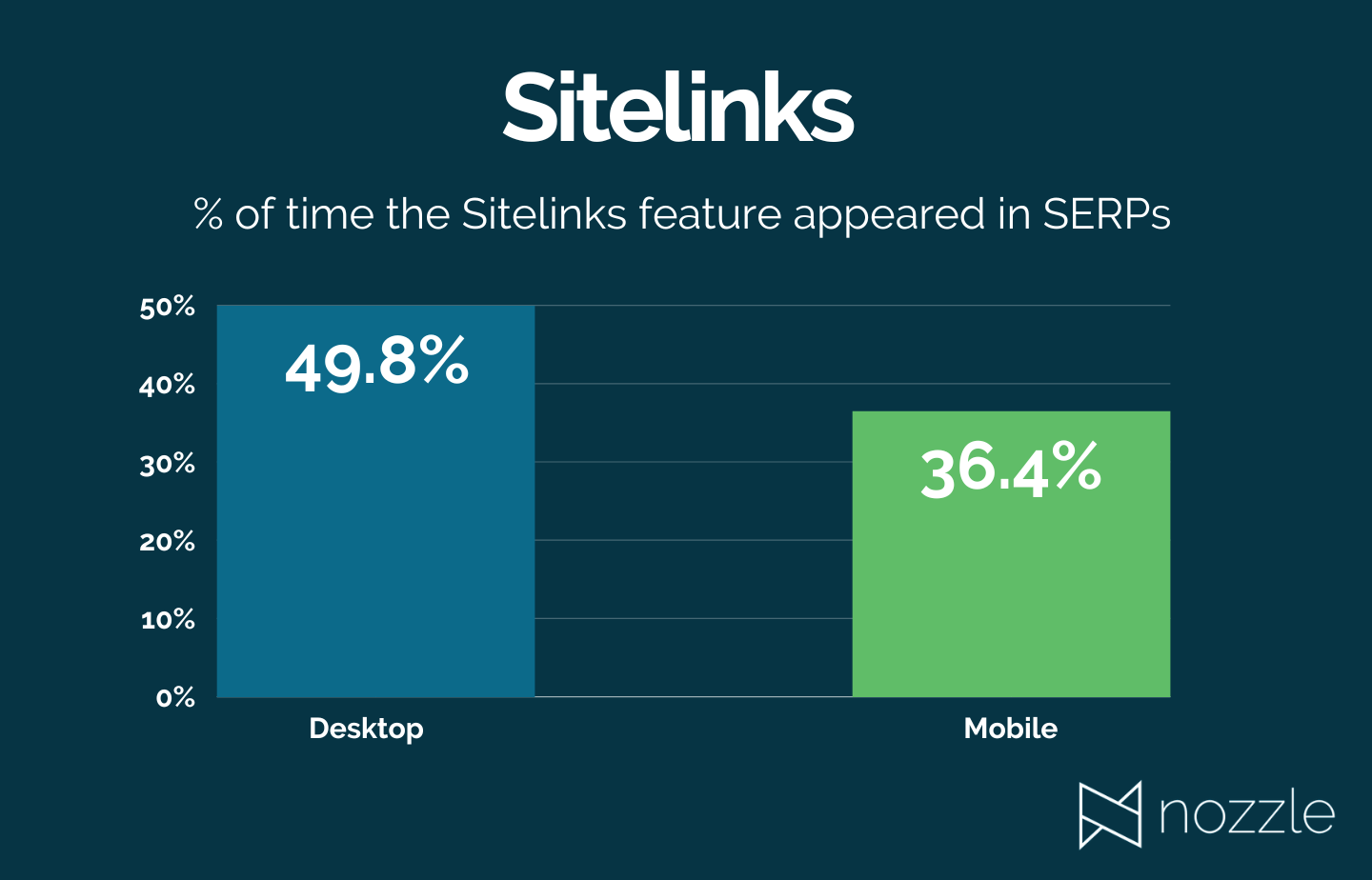 First, what exactly do we mean by sitelinks?

Sitelinks can also be the smaller links underneath a result, usually separated by tiny bullet points.

On mobile devices, sitelinks are again links underneath a result, but you can scroll horizontally to see more sitelinks. 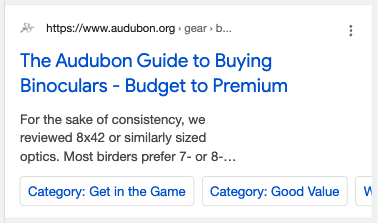 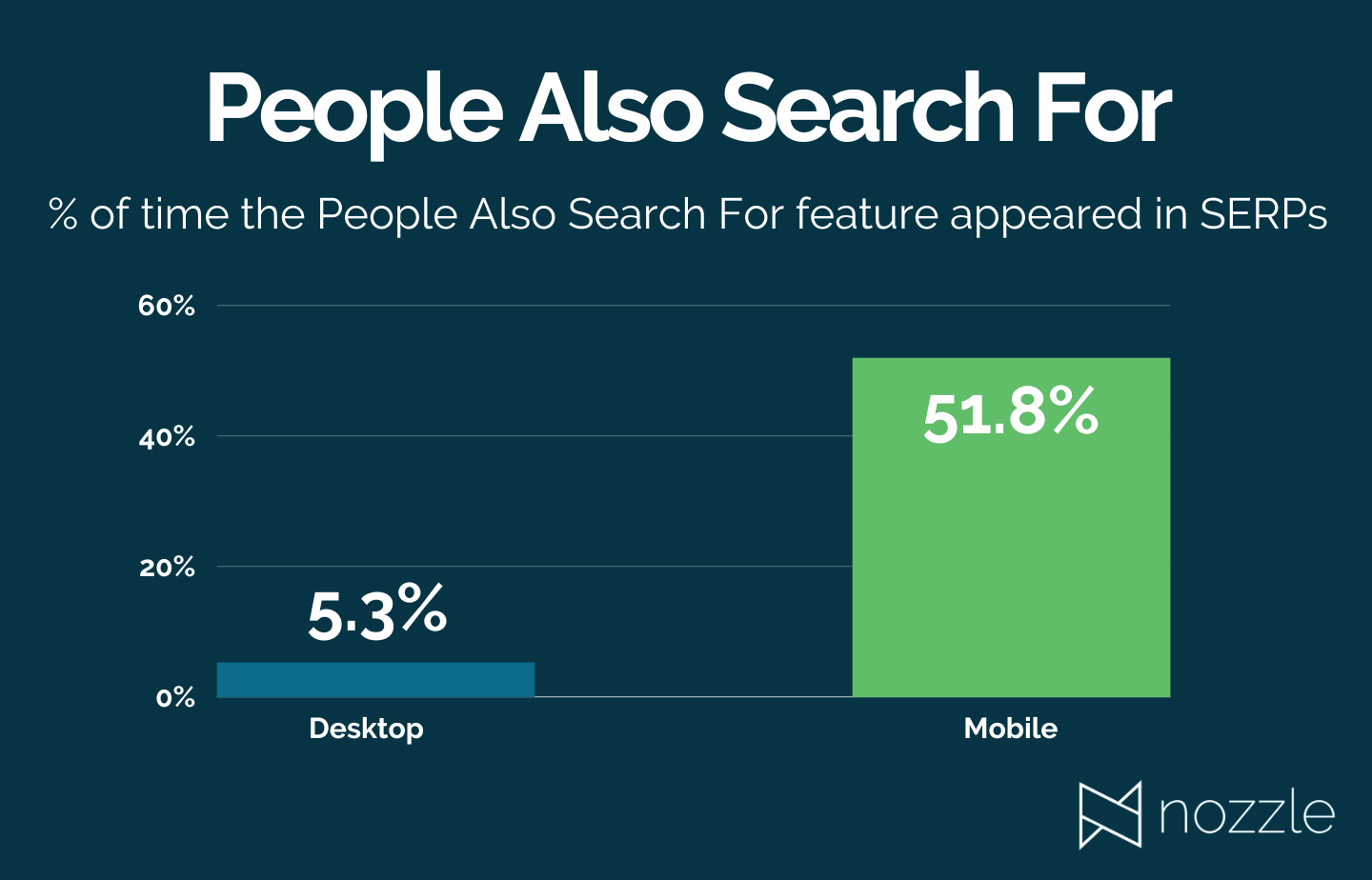 People Also Search For is an interesting feature that displays links to other searches that are related to your current SERP. You might see it near the top of the SERP underneath a direct answer and next to images. You might see it further down the page, looking sort of similar to a product pack. Or you could find it a the bottom of a knowledge panel or local listing.

On mobile SERPs, it sometimes looks so much like People Also Ask that a glancing look won't notice.

However varied it looks in the SERP, PASF appeared somewhere in positions four through ten about 76% of the time on mobile devices. On desktop, it appeared in a position lower than 51 about 82% of the time. The desktop percentage seems strange at first glance, but when you understand how Nozzle works, it's really not. 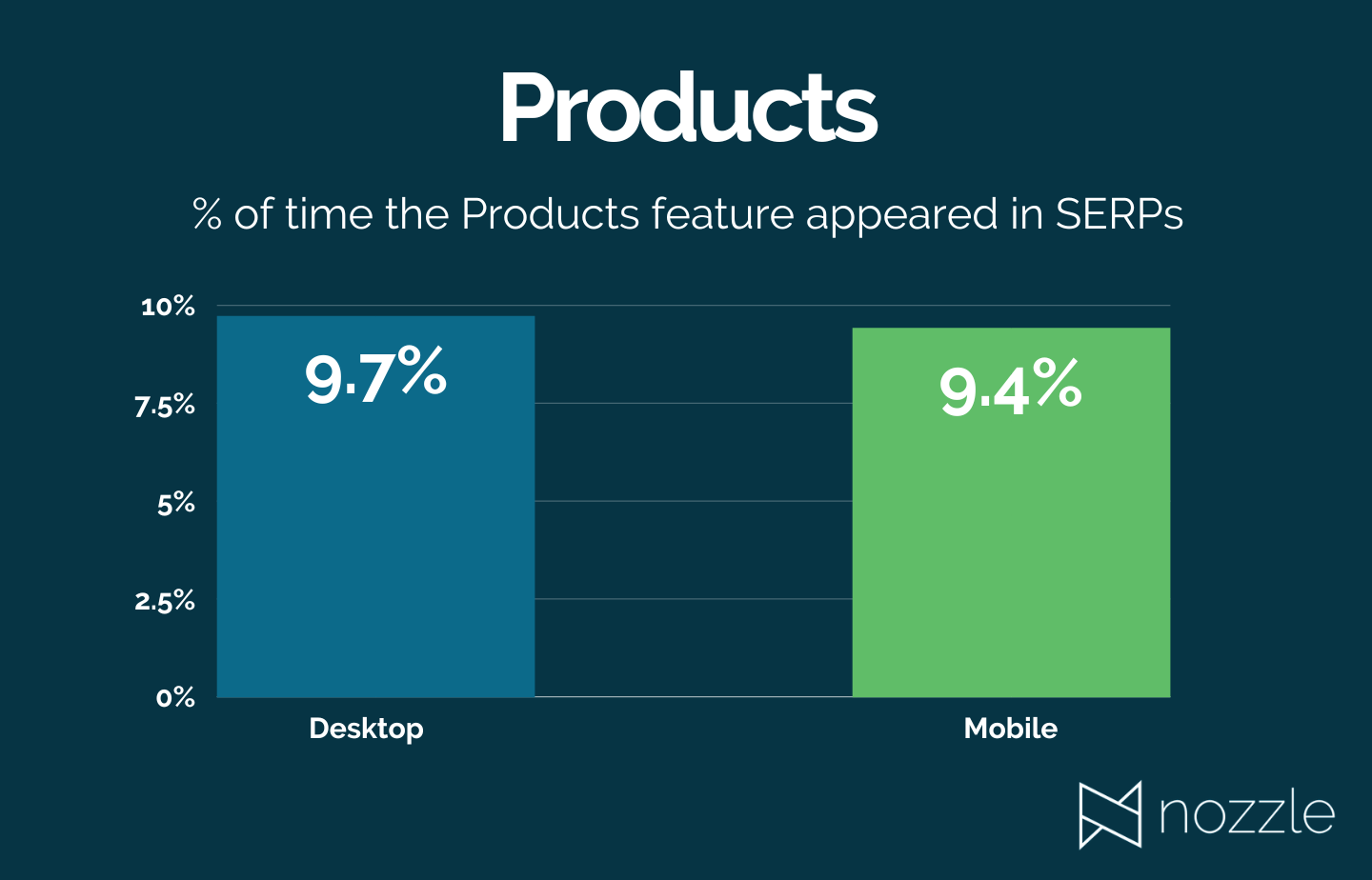 Product packs show products related to your search terms that Google thinks are relevant to the intent of your keywords. On desktop and mobile, you can scroll horizontally through a series of product cards that contain an image of the product, product name, price, where it's available, and sometimes star ratings.

In the image below, if you were to click on "Harbor Freight Tools" in the first product card, you'd get a larger modal with more information about the product.

This SERP feature is often called "Popular Products" or "Related Products", but we observed many instances of custom titles like "Popular Solar Panels", or "Top 24 Gaming Headsets". 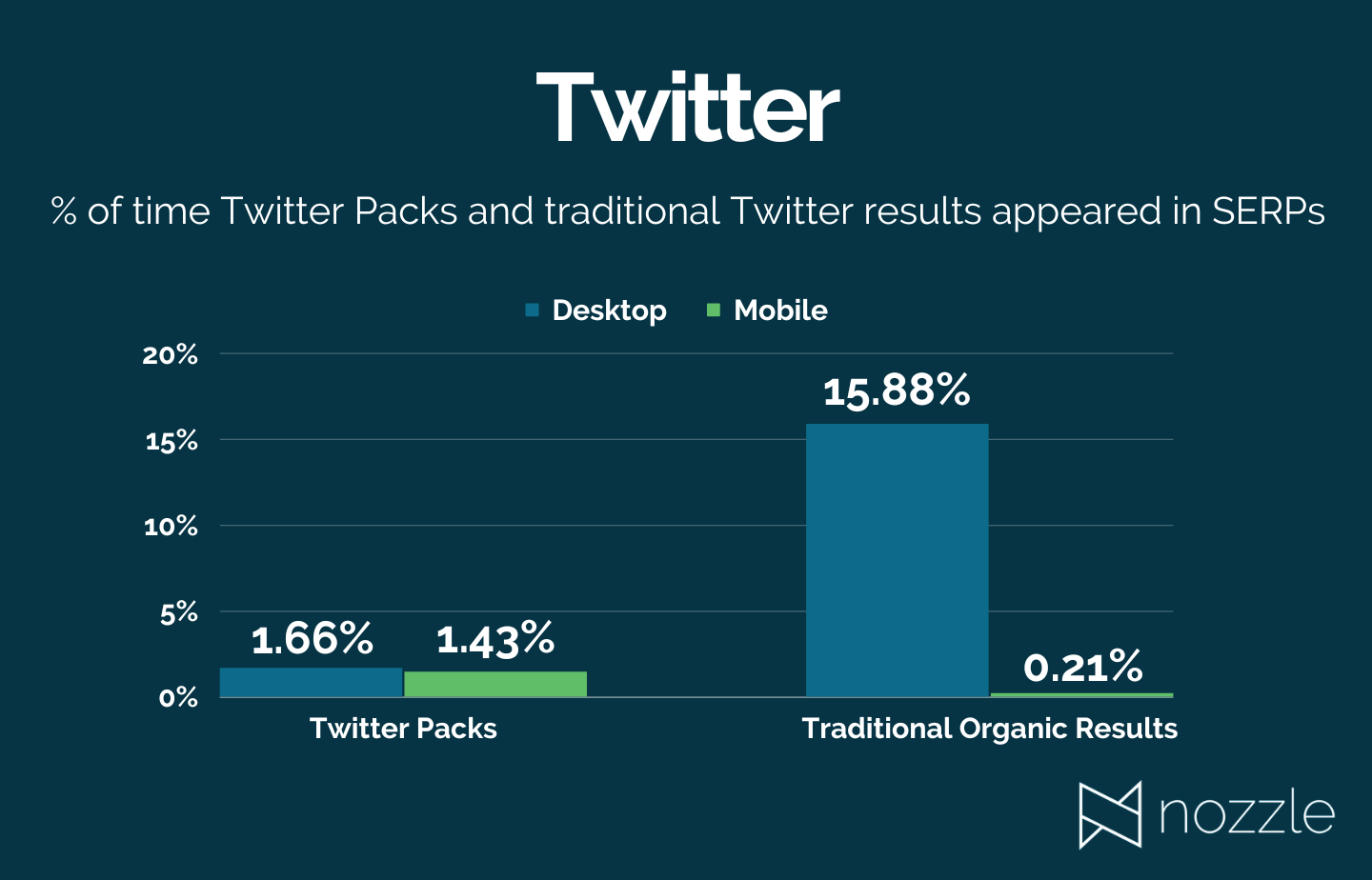 The Twitter SERP feature shows a pack of tweets related to your search terms that were recently posted on Twitter. In this test, we looked for Twitter packs with a single or multiple tweets diplayed as cards. 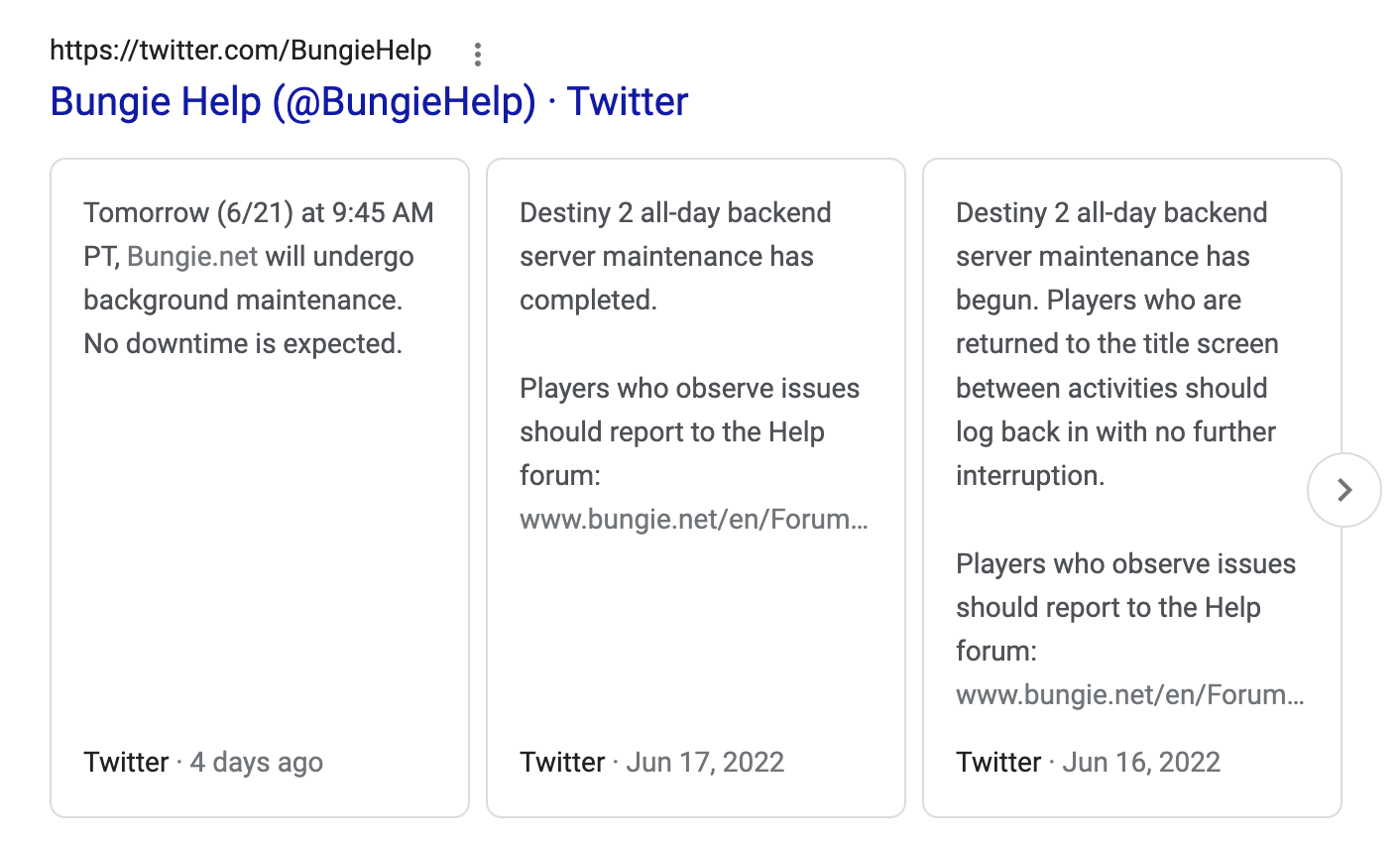 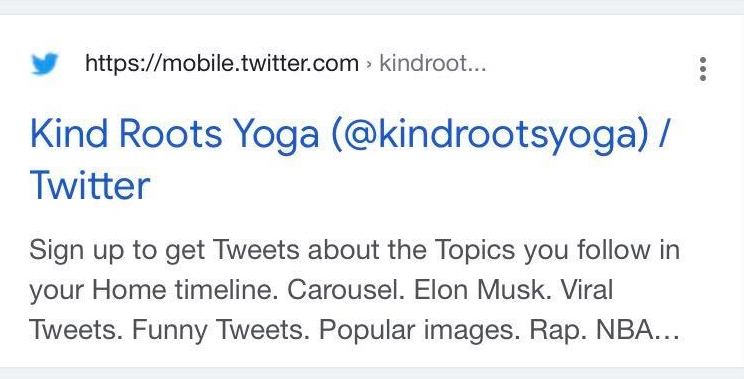 Looking closer at Twitter card packs, the results by position graph shows how rarely a pack showed up in a position lower down than 11. In fact, SERPS displayed a Twitter pack in positions 1-10 about 90% of the time on both desktop and mobile. 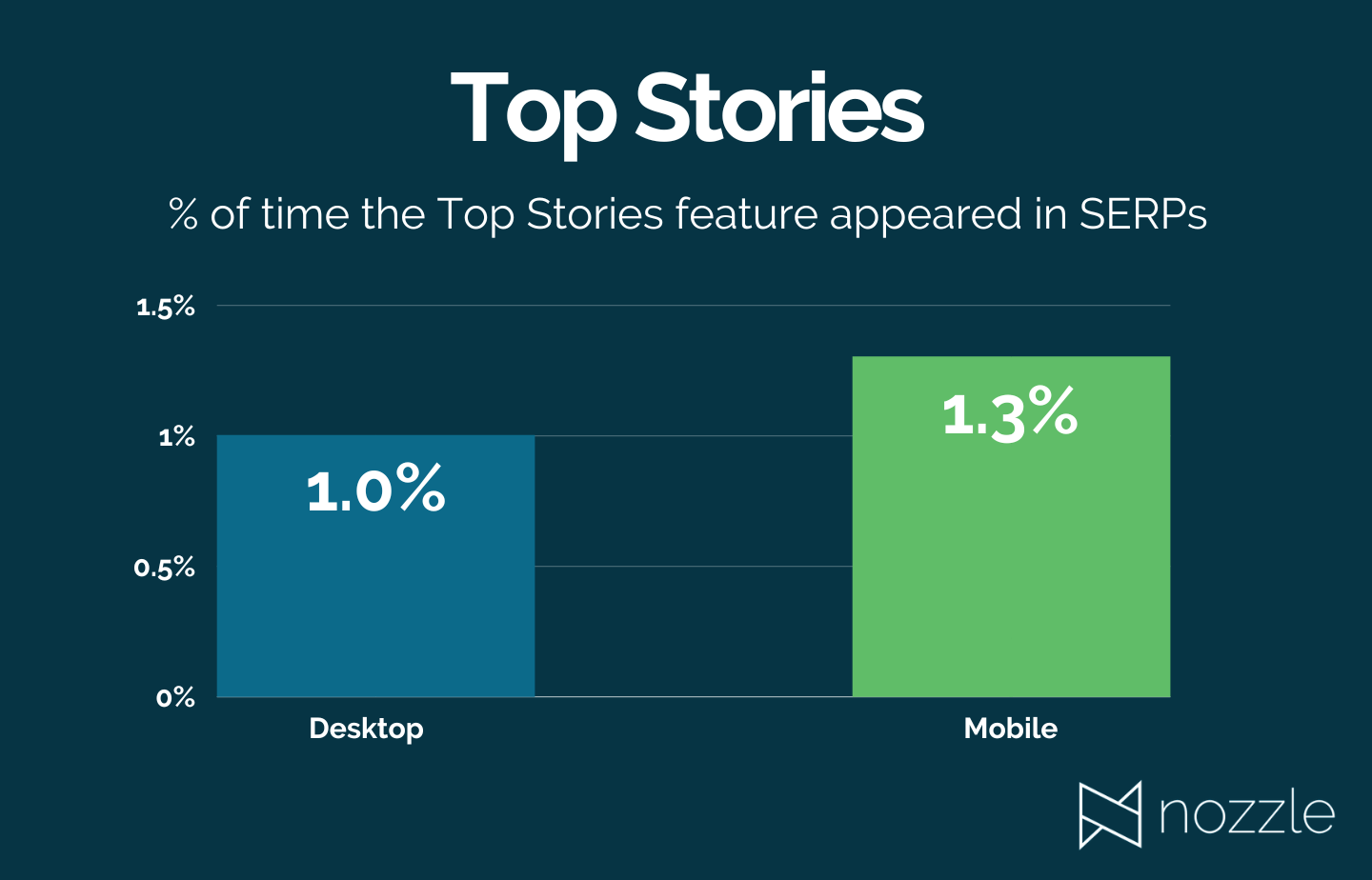 Top Stories is a SERP feature that shows recent news related to your search term. The stories are automatically selected, and the pack links to a page with more related articles on the News tab. The Top Stories pack will usually show four news articles, but we observed anywhere from two to six articles in a pack. 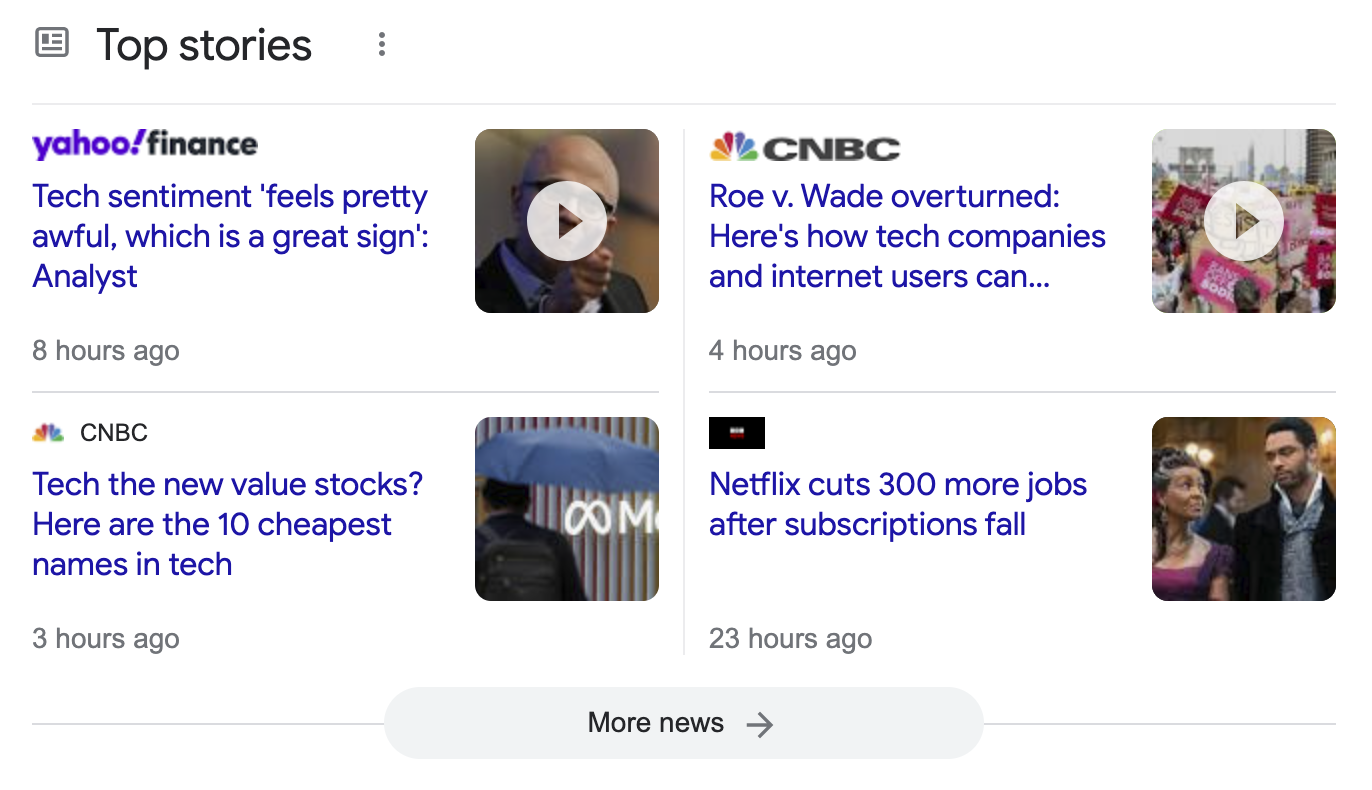 Stay tuned for more SERP stats posts like this one where we'll share statistics about other SERP features.

In the meantime, the real value comes from analyzing the SERPs for your specific industry.

For example, with Nozzle, you can:

Nathan Blair has worked in and around SEO since 2008. He enjoys spending time with his two kids, cycling, listening to heavy music, and keeping his blood glucose level between 90 and 130 mg/dL.